FilmTagger.com was created because we believe there's a better way to discover the movies that matter to you.


Are you a writer, researching your next screenplay by learning about prior cinematic works related to your story and theme? Or perhaps you're a studio executive or a producer, and you're delving into related work for the purposes of project green-lighting and production planning. Maybe you're a devoted film-buff and you just want to watch the best movies out there. Or a film-student who is trying to discover the most important films to watch for your chosen thesis or field of study.

For all these situations - and many, many more - FilmTagger.com is for you.

Since the inception of the film industry in the 19th century, a tremendous body of cinematic work has been created and made available to the global public. Sadly, most films and movies remain completely undiscovered by the majority of that film's target audience. Most films never even come close to receiving a theatrical release. The costs of producing and marketing a film have become prohibitively high. This might seem paradoxical, given the abundance of affordable technology now available to budding filmmakers the world over. The problem, though, is not the cost of technology. It's the human costs that have spiralled.

Consider even a modest production shoot. You need a crew. At the very least, a camera-operator, sound recordist and director. You need your cast, which can easily spiral from one or two people into dozens. Then you have support crew. Costumes, makeup, set-dressing, lighting, etc etc. All these people need to be transported to the site, fed, and coordinated. Usually, this happens over the course of several weeks, if not months. The costs of all that are enormous, even if many people are working for you for free.

Once shooting is complete, there's post-production, which itself involves an immense amount of human capital. Then we're onto screenings, promotion, marketing and word-of-mouth. The process is labour-intensive, and can often span several years. No wonder, then, that many films barely even get made - let alone seen. We're talking here about the films we DON'T hear about in the news. Films that aren't festival darlings, or Hollywood productions. Shorts, features, documentaries - there are literally hundreds of these films made every year... that we never even hear about. It's a great shame.

Fortunately, the internet provides the opportunity to disseminate lots of information about film productions at all levels. And that's where FilmTagger comes in. Through our tailored search engine, you can specify very detailed requirements about attributes you are seeking, and then tune and tweak your search to narrow in on the film titles most suited to your requirements.

Click to expand the screenshot below to get a quick overview of the advanced search capabilities offered by FilmTagger: 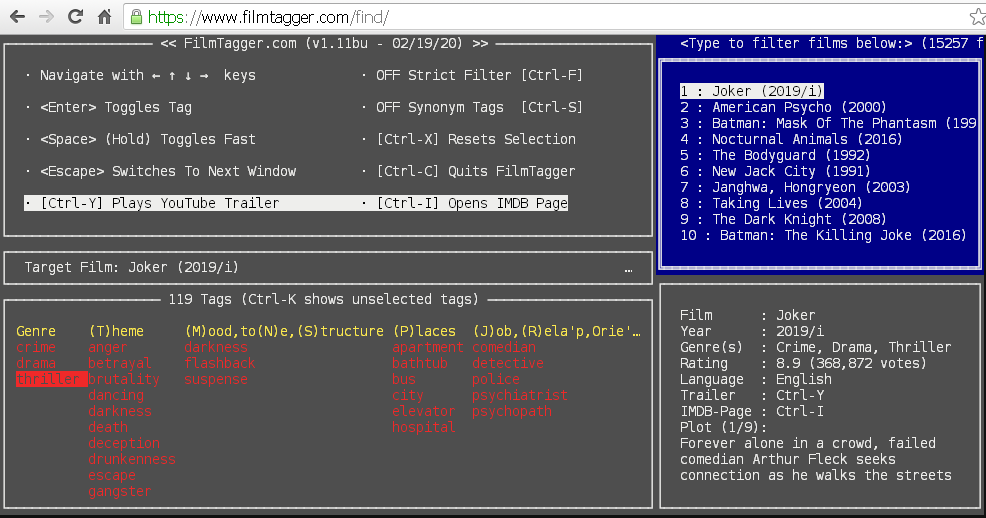 Perhaps - without quite knowing it yet - you need to see a foreign language movie, or an independent feature... or a straight-to-TV movie that never got a cinematic distribution. Maybe you are seeking films from a specific genre, or that tackle a specific subject. Imagine, for example, trying to find comedy movies about time-travel, which also feature a strong female protagonist. With FilmTagger, such searches are easy.

Maybe you're more interested in finding movies with a specific thematic element. Or films with a particular mood or tone. Perhaps you want to find movies about illness, which have a bittersweet tone and integrates mythical elements? Or find a film that focuses on the theme of jealousy, but that also feels surreal and is a remake? FilmTagger has you covered.

But it doesn't stop there. You can search for specific locations, time periods, or even for job titles or specific character traits. Maybe you want to find movies set in the snow, which took place in the 19th century, and which feature a protagonist who is a detective? No problem.

At FilmTagger, we believe the exact provenance of any given film shouldn't matter. Great work is great work, period. We strongly believe that getting the right films in front of the right people is an important and worthwhile mission.

And once you've found a film you're interested in, FilmTagger really comes into its own. Select that film to target it's attributes directly. The search engine will present a list of other movies like your target film. From there, you can again select, de-select and tweak genres, moods, tones, characters, locations and periods to narrow in on what you need. The possibilities are literally endless.

Got comments, suggestions or questions about FilmTagger.com?

Then please email us! Thank-you so much.